How many thoughts have you had, but not spoken? How many social media posts or comments have you composed, but canceled without sending? Filter your fingers.

As I've mentioned in the past, I intentionally don't write a lot of personal things on this blog. That's not why I started it and I'm not narcissistic enough (yes, we're all narcissistic to some degree) to think that my thoughts, dreams, and personal observations are all that important. I don't really feel compelled to express myself or talk about what's on my mind and it's not that I don't feel like people will care what I have to say; it's simply that I don't care what I have to say. In this age of information, I feel as though anything to be said has already been said and so why should I repeat it?

But I digress. Perhaps all the definitions and various places to write are slowly killing my creative outlet. Perhaps making the decision of what to write and where is becoming difficult enough that I choose to simply not write anything. My time can be used for more important things than figuring out where I should write, let alone what I should write.

Writing about events and places is easy: I simply recount what happened and maybe include some pictures for eye candy. But nobody wants to hear about the ride into work, or the meetings, or the support emails, or... or maybe some people do? Well, to those people I say go find another hobby. Or at least, find another blog. I find it absolutely revolting and a total waste of textual space and time to see people writing about things that have absolutely no substance. I will not become a twitter shitter or an iRaam. The last thing I want this blog to become is my personal diary. (This post is coming dangerously close to what I'm trying to avoid.)

Then there is the question of where to write. When I started this blog, it was easy. Facebook wasn't even open to the public and Twitter didn't even exist. Now I find myself posting thoughts, activities, and other updates on Twitter (trying desperately to stay within the 140 character jail) with my Facebook status automatically being updated by Twitter. (Then my Facebook friends, who probably never read my blog, comment on my updates and make me feel compelled to reply on FB.) Anything that doesn't fit on Twitter I usually put on my blog as an Aside (it appears without a post title), and longer stuff, like this post, get the honor of being a full-blow blog post with a Twitter update announcing it being published.

So why haven't I been writing more? I've been asking myself that question a lot the past few weeks and the only answer I can come up with is that my rule of not writing about passing thoughts or seemingly pointless observations is leaving me without much to write. I've been very busy concentrating on work and fitness and I haven't had much time for exploring my various interests or writing about them. So I'll try to start writing more asides with what's on my mind and see where that takes this blog.

After an arduous three days without my laptop, I finally have it back in my possession. I managed to get by using an old Thinkpad running Linux, a Windows XP desktop, and a spare G4 Mac Mini running OS X (all three of which saw very, very little use while I had my MacBook Pro). Every bit of my email is stored server-side (IMAP) and any important files were accessible on a backup drive, so it was really only the computing environment that changed.

Despite only the environment changing however, I observed something interesting: I felt a lot less creative and even mentally (and perhaps even emotionally) handicapped without my laptop. It's the first time I can remember feeling that way from something as simple as a piece of electronic machinery. I'm convinced it was the graphical user interface (GUI) I became attached to and, being someone who hates feeling attached or in any way dependent, the experience has encouraged me to continue moving towards console-based solutions for my daily computing needs.

Maintaining things on a remote console means the environment will stay the same regardless of the computer I'm using to connect. The "computing environment" essentially becomes the console window itself. Advantages to using console-based programs are numerous, that is once you get past the learning curve. But the same way a one-finger typist isn't very productive until he learns to type, console-based apps won't allow you to be productive until you become familiar and comfortable with the environment.

For all real-time communication (IRC, AIM, and Jabber) I've switched to using screen + irssi + BitlBee. Previously, I was using irssi for IRC and Adium for instant messaging. For email, I've been meaning to set up mutt for quite some time, but both the complexity and my daily reliance on email have caused me to procrastinate.

But I realized my console-migration doesn't need to end with IRC, IM, and email. For example, when my coworker mentioned the idea of an IRC Twitter interface, I looked for one and discovered tircd, an IRC proxy to the Twitter API. This made me realize that even things like posting to my blog could be done through IRC with the right proxy (similar to the way I'm currently blogging from the command line). And if a particular IRC proxy does not exist, I can just as easily write one myself and share it with the community!

Twitter is a service for friends, family, and co–workers to communicate and stay connected through the exchange of quick, frequent answers to one simple question: What are you doing?

Sure, Twitter has an intended use, but is there a law that forces people to limit themselves to that use? The hacker mentality is all about finding unconventional uses for existing things. I'm very anti-social. I have few friends. The friends that I do have are mostly like me and using a tool like Twitter to keep each other updated on what we're doing would be pretty boring. 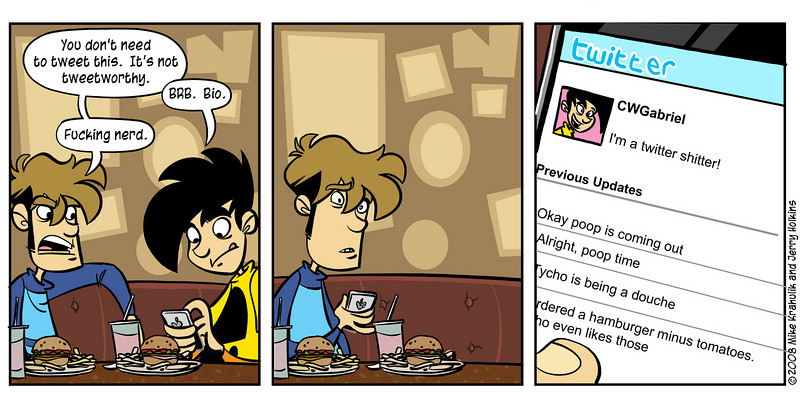 A recent comic on Penny Arcade about taking the Twitter question "What are you doing?" to an extreme gave me a good laugh. This morning David, my co-worker, told me that the blog post follow-up to the comic explained exactly the way he felt about Twitter. Here is an excerpt from that post:

The last "tweet" I ever did really explains it all, for me. I was up in Vancouver, and I put up a message saying so, and what kinds of activities I was engaged in. After I did it, I heard a voice - my own voice - saying, "Who the fuck do you think you are? Who are you that you can force your Goddamned minutia on other people, your stupid bullshit, your stone-ground artisanal condiments? How dare you. You should be ashamed." And I was.

Excuse me, but what makes Twitter any different than a blog with an RSS feed?

I'm against spending time authoring content that ends up being scattered all around the net, inside different free services that I really have no control over. They could disappear at any given moment, erasing all of my written history, all that time. I'd rather not give that power to anyone. Not Facebook, not MySpace, and not Twitter.

The only reason I'm using Twitter is because I have a plugin that automatically turns my "tweets" into a blog post -- not just a normal blog post, but one that is placed inside the Asides category so that it shows up specially formatted to make it clear that it's not something worthy of an entire post. If Twitter disappears, big deal. I still have all my tweets saved in the database for my blog.

But why use Twitter at all? It's simple. They provide an interface (SMS) that allows me to save my thoughts when they occur.

Quick, short thoughts. That's what I use Twitter for. Once in awhile I'll use it to say where I am or what I'm doing. If there happens to be someone following me on Twitter who's interested in that information, all the better.

The "hundred and forty character cage"? I like it. Since my tweets show up on the front page of my blog, I need to think about the importance of the message. If taking a shit is of great importance to me, then I have bigger things to worry about than whether or not I should use Twitter.