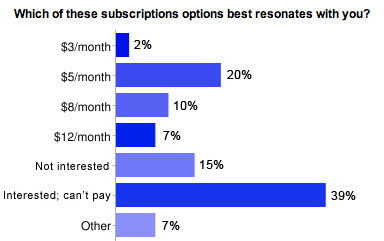 “Know your value,” everyone told me, “don’t undervalue yourself.” I was creating my first digital product and I began hesitating when it came time to choose a price. But the advice I received from friends led me to realize there was more to my hesitation: something was amiss with the status quo.

Using my perception of value to control the pricing process just felt wrong.

'Knowing your value', I realized, is a broken method for pricing digital goods. The intangible nature of digital work makes it easy to impose prices based on the creators' perception of value, but that's an outdated system that ignores the Internet's potential to create global equality.

Rather than arbitrarily choosing a price, I put together a survey describing the offer that I was creating and asked everyone on my email list to share their opinion. Who better to ask about the value of my work than those who had given me permission to send it to them?

I included in the survey a range of subscription options (based on what I would personally pay) and then asked everyone to share what resonated with them. Here were the results:

Using these results, I then calculated an average price and used that to set the monthly subscription for my Journal, which I'm quietly launching with the publication of this essay.

Will this average price make sense for everyone? No, probably not -- the price will be too high for some, and too low for others. But will the price be fair? Yes.

In allowing your collective voice to set the price, I'm able to guarantee that your opinion overrides my own, even if that means using a higher price than I'm comfortable with (I was in fact going to use a lower price before I conducted the survey).

Asking permission before pricing my work gave you, my audience, a platform to participate in the pricing process and ensured that your opinion played an vital role in the valuation of my work.

What is Permission Pricing?

Permission pricing uses the privilege of an audience to understand what that audience would pay for our work. It recognizes that equality cannot be achieved through imposing our individual sense of value on others, and it uses the power of gift-giving to create a sustainable mechanism for increasing both awareness and perception of value.

There's a good chance you're already familiar with permission pricing: When you ask a friend how much he'll give you for something that you want to sell, you're employing permission pricing. You're offering your respect by understanding the other persons' perception of value and then doing business accordingly.

A similar concept you may be familiar with is that of permission marketing, which recognizes that treating people with respect and getting their permission before marketing to them is the best way to earn their trust and attention.

But if we build an audience with permission marketing and then turn around and sell to them without employing 'permission pricing', we're effectively communicating that we will do business, but only with those who agree with our perception of value.

That method of pricing degrades the trust we build through permission marketing. It's like asking for permission to speak with someone and then ignoring them when they give it to us.

Not everyone in our audience will want to buy from us and that's OK. Some people only come for our gifts and they will stay for our gifts as long as they remain genuine.

Using gift-giving, we can increase the perceived value of our work while also increasing the awareness around it. This method isn't as lucrative as imposing our own prices, but it is a method based on equality and it ensures a truer valuation of our work.

Using Gift-Giving to Increase Awareness and Perception of Value

Gift-giving is the act of offering something of real value without strings attached. The more true gifts we give away, the greater the number of people we will attract who will appreciate the value of our work.

When we attract people who appreciate the value of our work, they will talk to others about the gifts we're giving and upon receiving those gifts, they will want to give something back. This simultaneously increases the awareness around our work and adds to our perceived value.

There's one reason this works: Everyone who receives a true gift wants to give something back.

But the key here is to give away true gifts. What's a 'true gift'? True gifts are just as valuable -- if not more valuable -- than the products we sell.

An easy way to tell if we're giving away true gifts is to consider our free work. Could we sell it? If not, then there's a good chance it's not a true gift. It's probably wrapping paper, a cheap attention-getter that serves no purpose but to increase the statistical probability that we'll make a sale or attract more traffic.

If the gifts we're giving are nothing more than wrapping paper, our audience will eventually notice and we'll lose their trust. We want to be giving away true gifts, not bogus gifts. True gifts get people talking to other people about the quality and remarkableness of our work and they add to the perception of our value.

The Industrial Death of Permission Pricing

The concept of permission pricing certainly isn't new. In fact, it was once far more common than it is today. Its unfortunate absence in business can be attributed to the factory-based methods of the industrial revolution and the culture that has emerged from it.

As products became cheaper to manufacture and the cost of production dropped dramatically, the need to involve customers in the business process dried up. Instead of using human relationships to create a shared understanding of value, businesses began imposing and adjusting prices based entirely on earnings.

Products were now made in factories -- not entirely by humans -- and the human element quickly disappeared from business. Everything became about the numbers. Doing business wasn't about providing quality and value or developing relationships with people. It was about production and sales and making money.

If sales were low, business owners dropped prices (or ran a 'sale') to increase the numbers. If sale-volumes were high, they produced a new product (or simply renamed an existing one) to keep people interested while they experimented with raising prices until sales slowed again.

With the digital revolution, it became easier than ever for this culture to change. With digital products that could self-replicate and technology that allowed for connecting directly with customers, businesses had an opportunity to create and price products based on the shared collective.

Unfortunately the old methods of doing business were too entrenched. Now customers were literally just a number on the screen, a traffic statistic or a conversion rate in a report.

But all hope wasn't lost.

A Digital Rebirth of Human-based Transactions

CraigsList circumvented the equalizing nature of the Internet by creating a platform that allowed buyers and sellers to connect offline, thereby using their geographic location to build trust and a create sense of equality.

In a world where the human element of business had been corrupted with greed, deception, and a relentless desire to make more money, these businesses made people feel human again. They gave people a voice and generated a sense of equality, empowering people and giving them respect.

The true potential of the Internet lies in its ability to create equality and facilitate human-based transactions. Thankfully, we're already beginning to see a shift in business towards utilizing this potential, despite its absence in the prevailing culture.

Market trends like nichification refocus businesses on people. Instead of pumping out products and hoping that someone buys them, businesses are now learning to understand what their audience wants and then delivering value directly to them.

The opportunity to capitalize on the humanizing nature of the Internet is huge and the people at the forefront of this movement are the individuals who seek to involve their audiences in the decision-making process. They are the ones who continue to experiment and push the edges of what it means to do business.

This is Our Digital Revolution

To step towards a sustainable future, our archaic methods of doing business need to evolve. We need to recognize the significance of this digital revolution -- our revolution -- and work towards creating a culture of equality where the work we do matters.

"It's hard when your mother-in-law doesn't buy into what you're doing and it's hard when the economy is going through a transition, to understand this - but this is our revolution.

This is the industrial revolution of our time; we are living through the death of the factory, and it is being replaced by something else. And the people who are on the cutting edge of that are the people who are inventing the next thing and talking about it with clarity.

So when this revolution slows down, we're going to look back and we're going to say, 'so, what did you do?'. And I guess what I would say to the listener is, 'do something that matters'.

This is the time to do work that matters, to do something bigger than you think you're capable of, and do it in a way that makes a difference." - Seth Godin

The way we choose to do business today will influence the way business is done for generations to come. We need to embrace the fact that we're now living and working in a global society. When it comes to things like pricing our work, we need to recognize that it's no longer just about us, it's about our readers and our customers.

When we price our digital work, we don't need to impose our perception of value and expect other people to agree; there are better ways of approaching pricing. Ask your audience what they will pay. Ask them for their opinion and seek to understand their perspective. Converse. Listen. Ask permission.

A caged bird unable to fly will go crazy and pluck its own feathers, leaving patches of skin naked and raw. Feather-plucking represents self-inflicted destruction in response to the stress of captivity and loneliness.

Like a captive bird, your dreams will commit ritual suicide if they're held hostage in a cage of reason and self-doubting routine. If held back from realizing their potential, your dreams will turn to cannibalism.

Don't let that happen. Lose yourself today. Free your wildest dreams from the cage that is your logical, must-be-serious subconscious. Give your dreams permission to leap into the abyss of potential. Give them permission to spread their wings and soar through the skies of possibility. Ask yourself, "What if?"