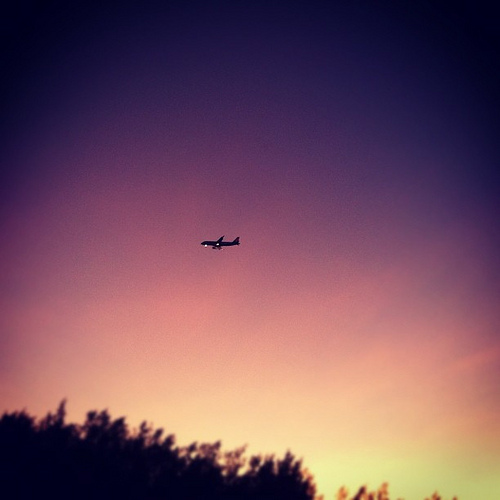 I’ve watched thousands of airplanes fly over me. I’ve flown in hundreds of them. I’ve watched the earth float by beneath me, studied how these machines work their magic, how humans build their wings, and how pilots master their controls. I’ve even been lucky enough to pilot one myself.

But when I hear one going by, no matter what I’m doing, I still stop and tilt my head to the sky with a childish sense of wonder and watch this mechanical work of art float past (a rather dangerous distraction when I’m driving; I’ve lost a hat this way).

On several occasions in the past few months I’ve found myself on the beach, gazing at the birds and watching as they glide across the ocean. Seconds later I’m presented with the opportunity to observe a similar bird, this time a manmade one, its shiny metal body and heavy engines pushing itself across the sky.

How are these manmade creatures of flight different from those found in nature? They’re both built for the same task: to fly, to temporarily defeat gravity and make use of an invisible force, to float through an invisible landscape.

The natural creature is certainly the more elegant and it’s far more attune with its surroundings. While it blends into the landscape and reacts to the flowing currents of air, its clumsy mechanical counterpart pummels through with sheer force, relying solely on the most basic and most fundamental principals to stay aloft.

One creature was created by nature, the other was created by us, a creation by a creation, a new species of flying creatures designed, engineered, and built entirely by humans. We saw birds flying through the air and we wanted to experience that flow, to obtain that mobility.

For thousands of years we tried manufacturing feathers. We tried making ourselves as light as possible. We tried jumping off cliffs and making contraptions that seemed to mimic the wings in nature.

Everything failed and many lives were lost, but we continued building, testing, risking, and experimenting.

As we began to understand the invisible landscape, we learned to combine visible shapes with invisible forces. We manufactured structures from whatever materials were available and even began inventing and shaping materials that didn’t exist naturally.

Elegance wasn’t nearly as important as function. What mattered was obtaining flight. And so we took to the skies in birds made of wood and metal, eventually refining our models and smoothing our designs.

When I look to the sky now and I see an airplane flying over me, what I see is an example of what it means to be human, that innate desire we all possess to recreate the things we hold with respect and admiration, that need to prove to ourselves and to others that nothing is beyond our ability.

We create because that’s who we are. We live our lives making choices and decisions based on hopes and dreams because we believe. We believe that even the remote possibility is entirely possible, that despite all the odds, the impossible is only two steps away from possible.

To create, to turn thought into action, to push and fight and struggle against all logical reason and bring life to visions and ideas, to shape hopes and dreams into tangible moments of reality and string them together one by one, to learn how to fly when we were born to walk, that is what it means to be human.