After electronically obtaining a six-month Australian tourist visa over the weekend, I purchased my one-way ticket to Australia. I leave May 9th from Boston, MA and, after a layover in Los Angeles and then in Auckland, New Zealand, I arrive at the Gold Coast Airport just south of Brisbane, Australia (for you travel geeks the precise route is BOS-LAX-AKL-OOL).

Initially I'll be staying with a friend near Brisbane, but I intend to explore the rest of the country by train (Australia is nearly as big as the continental United States). I hope to visit Cairns and Darwin in the north, Sydney and Melbourne in the south, Alice Springs in the middle, and finally Perth in the west.

I also intend to maintain a travel budget of $500-$800 USD per month while I'm there. I've heard this will be quite difficult with Australia's relatively high cost of living, but that makes the challenge even more enticing.

I'll also need to have relatively consistent internet access to continue working. Both internet access availability and my budget will play a part in determining how much of Australia I actually see.

Tomorrow morning I will be watching the Space Shuttle Discovery, mounted to the top of a Boeing 747, do a low flyby over the ocean en route to the Smithsonian Air & Space museum in Washington, DC where it will retire. (The first shuttle launch I attended was space shuttle Discovery on STS-133 last year.)

After watching the shuttle fly out from Florida, I will begin my week-long drive up the eastern coast of the United States, driving north to Myrtle Beach, South Carolina where I will meet up with a friend for the evening.

On Wednesday I will continue driving and visit two more friends in North Carolina and Virginia, arriving in Washington, DC on Thursday where I will stay for a few days, participating in a special event for the unveiling of the Space Shuttle Discovery at the Smithsonian (the same shuttle I saw leave from Florida).

My goal is to arrive back in New Hampshire on Monday, one week from today, where my sister is due with her baby girl. I will immediately list my car for sale on CraigsList and hopefully sell it before my trip to Australia in May.

If you happen to live somewhere along my route from Florida to New Hampshire, or anywhere in Australia, please let me know; I'd love to meet up! 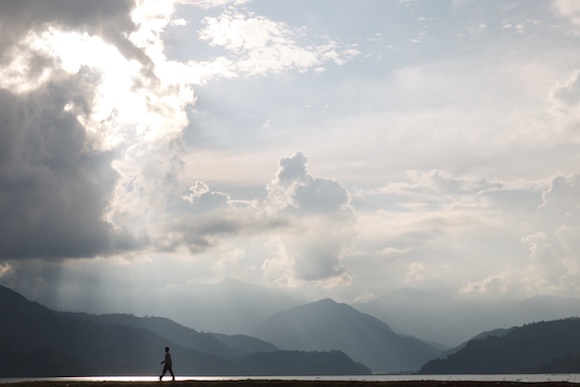 The words "be the change you wish to see in the world" are easy to say, but the danger behind the simplicity of those words is that changing ourselves is not an easy task. It's a complex and oftentimes difficult endeavor. In fact, it can be so difficult that neglecting ourselves and choosing to help others is often the easier option! END_OF_DOCUMENT_TOKEN_TO_BE_REPLACED

I mentioned in my previous post that I wasn't going to post on a schedule anymore, but I didn't expect to go this long without posting anything.

I flew to central Vietnam a few days ago to a city called Hue (pronounced hu-way). The hotel, which is still under construction, is very comfortable for $15/night but it has no WiFi access and I wake up every morning to the sound of banging. But I'm not paying for the room, so I can't complain.

My friend David and his wife Mai have been awesome; they're letting me tag along with them to visit Mai's family and they have been introducing me to everybody along the way (Asians have huge families).

The first few days in Ho Chi Minh City were packed full of tours and trips to various places. Waking up at six in the morning with only a few hours of sleep wasn't fun, but I wasn't going to miss an opportunity to get a free tour of Vietnam. END_OF_DOCUMENT_TOKEN_TO_BE_REPLACED

The Malaysian Airlines red-eye from India to Vietnam was comfortable, but somehow I only managed to get two hours of sleep. Being that this was my first time flying Malaysian Airlines, I was pleasantly surprised by the fruit-colored seats and colorfully dressed flight attendants -- quite a different experience compared to the dry and bland feeling of say, an American Airlines flight.

My flight stopped in Malaysia's beautiful Kuala Lumpur airport for two hours where I almost accidentally got on a plane to Singapore instead of Ho Chi Minh City. END_OF_DOCUMENT_TOKEN_TO_BE_REPLACED