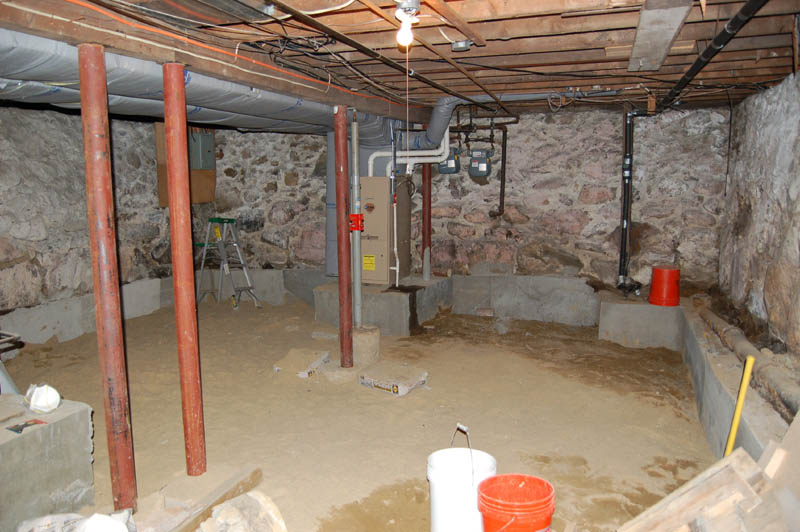 The basement of my two-family house started with a dirt floor and approximately 6′ of clearance from the dirt to the first floor rafters. Some of the pipes made the clearance even less. I decided that I wanted to make the basement into a livable area, however that would only be possible with a concrete floor. I also realized that if I wanted to put in a ceiling, I would need at least another 2′ of clearance. The first shovel full of dirt was removed in 2004. I had planned on completing the basement that year, however I had no idea how much work would be involved.

I had never installed Lally columns by myself before. When I was about 14, I had helped my dad replace Lally columns on a house he fixed up. I remember using the plumb to find the exact spot to place the Lally columns. I decided that I’d rather pay someone to have it done. So I looked through the phonebook, and found someone. They charged me $200 per Lally column. That included digging the hole, pouring the footing and installing the Lally column. They did a horrible job to say the least.

When I started the digging, I had hoped that I would be able to use the wheel barrel to wheel out the dirt. However, the Lally column that was installed was put too close to the doorway. So the wheel barrel wouldn’t fit out the door with a sizeable amount of dirt in it. I ended up resorting to carrying out the dirt in 5 gallon buckets, two buckets at a time. It was an excellent way to build my forearms! The huge pile of dirt you see in the pictures below was moved there with 5 gallon buckets.

The other major obstacle I needed to overcome was the fact that the whole foundation for the house was resting on the very dirt I was about to start digging out. I had to dig 2′ below the foundation! I later realized that I should have done a lot more research before attempting something like that. I decided that I would pour 6" thick concrete forms below the foundation to hold back any dirt from falling out from underneath the foundation. Of course, I couldn’t just dig out all the dirt first, and then pour the forms, so I dug out 5′ sections and poured a form. Once that had dried (24 hours), I removed the plywood form and dug out another section to pour. I tried to dig out the sections at opposite ends of the house, so I would minimize any chances of the foundation caving in.

The following pages will contain mostly pictures associated with the dates I took them. It will give you an idea of how things progressed. I will add notes to whatever pages contain things I can comment on or describe.

This project actually started in 2004, however the majority of the work was done in 2005. One thing that slowed me down was the fact that I had a bunch of stuff in the basement that needed to be moved out. I had a small shed in my back yard (about 8'x5'), however it was already full of stuff. I had started to collect quite a variety of tools from all the work I'd done on my house and my other properties. I realized I needed a new shed. I completed the following digging before I started building the shed. Please visit my shed project page for details on that project and the reason I had to postpone the basement project for almost a year.

You can also see what the original height of the basement floor was. Also visible are some of the first concrete forms I poured. Keep in mind, all that sand was moved out with 5 gallon buckets, two at a time!

Note: There are more pages to this post. Scroll down to see the rest of them.