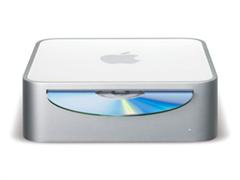 I now have two Mac mini's sitting on my desk. David (at Aerva) gave me the broken Mac mini that was sitting in the office unused. Here are the specs:

I brought it home, turned it on, and sure enough it wouldn't boot. So I went to MacEdge in Nashua, NH and gave it to them for repair, only to have the problem incorrectly diagnosed as bad 3rd party memory; or so I thought. Here's the letter I wrote to the Mac technician the second time I brought the computer in:

I originally brought this Mac mini in for repair because it would not boot. I have the care plan on it, so I should be covered for another 2 years (purchased in Jun of 2005). A few days ago, a Mac tech called and informed me the problem was bad 3rd party memory. This being the case, it was not covered under warranty. So the Mac tech reinstalled the software, stuck the old memory back in the Mac and I paid $75 when I picked it up.

When I arrived home, I plugged the Mac in, fully expecting it not to work. However, it booted with the new software, asked for my registration information, and finally booted into the OS. I was then prompted to download updates, which I did, and then went to bed.

The next morning the Mac mini was still running. It had finished installing updates and asked me to reboot, so I did. After rebooting however, I received the following message:

“You need to restart your computer. Hold down the Power button for several seconds of press the Restart button.”

I tried both warm and cold boots, and still receive that same message. I have another Mac mini (also a G4 but 1.42ghz instead of the 1.2ghz ) which has been running flawlessly since I purchased it over a year ago. I removed the RAM from the broken Mac mini and put it in my original working Mac mini. It booted fine. I tried restarting it, installing updates, and using the software, and it works perfectly. Keep in mind this is while using the “bad 3rd party memory”.

Puzzled, I took the RAM from my original Mac and put it in the broken one. After booting, I received the same message asking me to restart.

So it appears as though the problem is not bad 3rd party memory, but rather another issue, possibly a bad motherboard, which would be covered by the care plan.

The second time I brought in the computer, it did not have the "bad 3rd party memory", it had my known good memory inside. About a week later, I picked up the Mac mini again and the tech's notes said that there was nothing wrong with the computer. He reinstalled the software, rebooted several times, left it running for over 48 hours, ran a couple of CPU and memory intensive applications, and never once did anything go wrong. Luckily, I did not have to pay anything the second time, since they did not discover any problem.

The tech's notes also gave me a very helpful clue: He said that installing the OS with bad memory could corrupt the Kernel of the OS. That means that replacing the bad memory with working memory would not fix the problem because the kernel itself is corrupt. So I concluded that I should be OK to use the memory, as long as I don't install the OS using that memory.

I tested my theory by attempting to upgrade my original Mac mini (1.42ghz) from Panther to Tiger, using the Tiger upgrade CD I accidentally found in my Mac mini box yesterday and the "bad" memory. Sure enough, I couldn't even get the install to start. It kept giving me weird errors and would not allow me to proceed with the upgrade. As soon as I took out the bad memory and added my original memory, the install worked flawlessly.

I'm a bit nervous using the "bad" memory in my other working system, only because I don't feel confident that it will continue working forever. The system could one day decide to crash out of the blue. Since I don't use the Mac mini for anything besides becoming familiar with the OS, this shouldn't be a problem. However, I do plan to use my other Mac mini (the slower 1.25ghz one) as a Debian Linux server, so I'll have to make sure it has the good memory inside.