For those who are not familiar, broken telephone, also called Chinese Whispers1, is a game in which one person whispers a message to another and the message gets passed through a line of people until the last player announces the message to the entire group.

Errors typically accumulate in the retellings so that the statement announced by the last player differs significantly from the one uttered by the first.

It's human nature; we're imperfect. But there's nothing wrong with that. In fact, it's what makes us beautiful. It's why we invent and play games like broken telephone.

But now everyone--you and me included--is playing a very grown-up game of broken telephone. And we play it every day. In this adult version of the game, the whispers can be dangerous and the game is much bigger.

By participating in the social web and using modern communication tools--cell phones, text messages, social media platforms--we're all participating in a global game of broken telephone, transmitting messages from one person to the next at the speed of light.

But what happens to our message as it gets transmitted? What happens when we retell something we've heard and then people start whispering our version of the story to others around the web, emailing it, tweeting it, and texting it?

What makes this adult version of of the game dangerous?

To find out, let's first start with a little history.

How Disinformation Killed my Grandfather

Cigarettes are a classic example of how false information can be dangerous. Many of us can relate to this particular example because it happened recently enough in history that our parents (or ourselves, if we're old enough) had first-hand experience with mass-exposure to false information that was propagated for financial gain.

There was a time when cigarettes were advertised as being good and healthy for you, a time when doctors would come on to the television and tell you what brand of cigarettes they smoked.

There was a time in very recent history when doctors would tell you that cigarettes were perfectly safe, even for moms and babies. 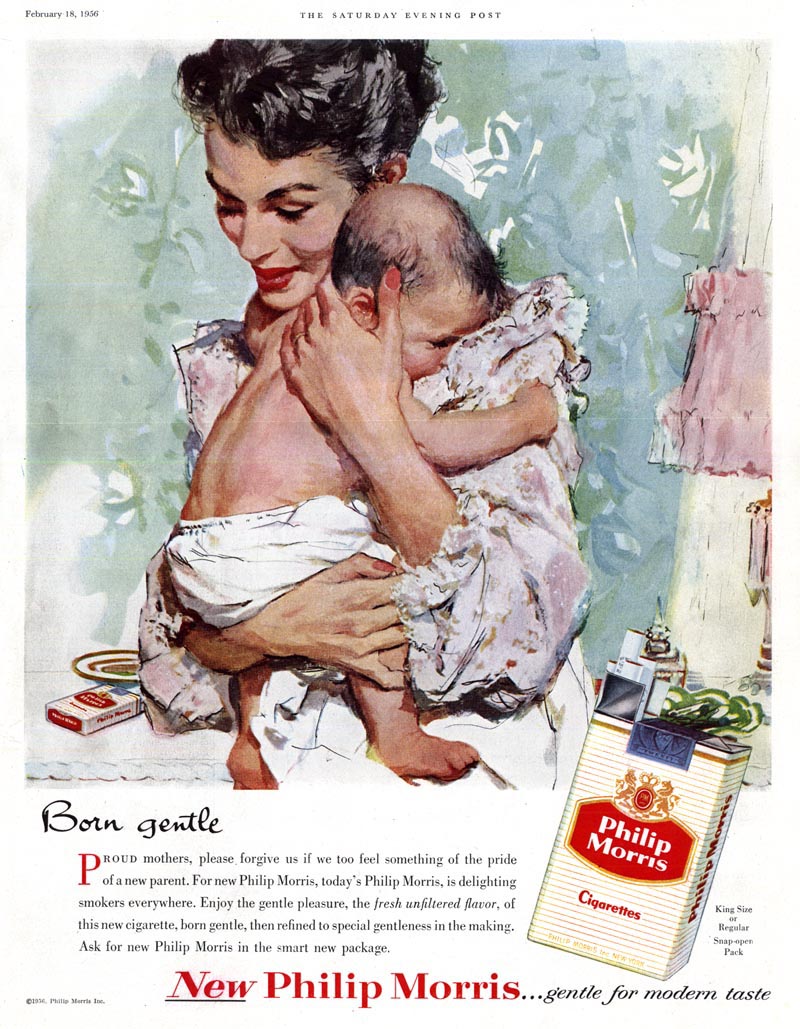 That's just it. They didn't have any good reason to doubt them.

The difference between fifty years ago and today is that now so many of us know the truth. Now so many of us have heard stories or have family members, as I do, who have died of cigarette-related diseases.

Now the truth about cigarettes is louder than any amount of false information and now even the people who continue to smoke cigarettes accept the reality of that truth.

How History is Repeating Itself

In 1953, members of the tobacco industry hired the firm Hill & Knowlton to help counteract findings that suggested cigarette smoking led to lung cancer.2

Just think about that: the tobacco industry was openly and legally paying a business to spread false information that would guarantee more sales of cigarettes to people would later die from lung cancer, like my grandfather did when I was growing up.

But that's all behind us now, right? We live in a more informed and more civilized society and the truth is everywhere, right? With all that we know, we couldn't possibly let stuff like that happen again, right?

In 2009, members of ANGA (America's Natural Gas Alliance), a lobbying organization for the gas industry, spread $80 million in funds across several agencies, including Hill & Knowlton (yes, the same firm hired to spread false information about cigarettes in the 50s), to try and influence decisions on the process of gas extraction known as hydraulic fracturing.3

But here's what we know: Gas extraction and hydraulic fracturing (also known as 'fracking') release toxins into the local water supply that have known adverse health effects. These include neurological, pulmonary, gastroenterological, dermatological, immunological, hematological, endocrinological, reproductive, and genetic illnesses and abnormalities.4

I can't even pronounce all of those, but I bet they're not good for me.

But you have nothing to worry about, right? You don't hear much about fracking so it probably won't effect you, right?

If you think you're safe, check Fracking Across the United States to see if your water supply (which comes from all directions) may be tainted and slowly killing you and your family (and certainly poisoning the water supply for future generations).

(By the way, it has also been found that Hill & Knowlton employees modify Wikipedia articles, so beware of the links I reference in this essay.) 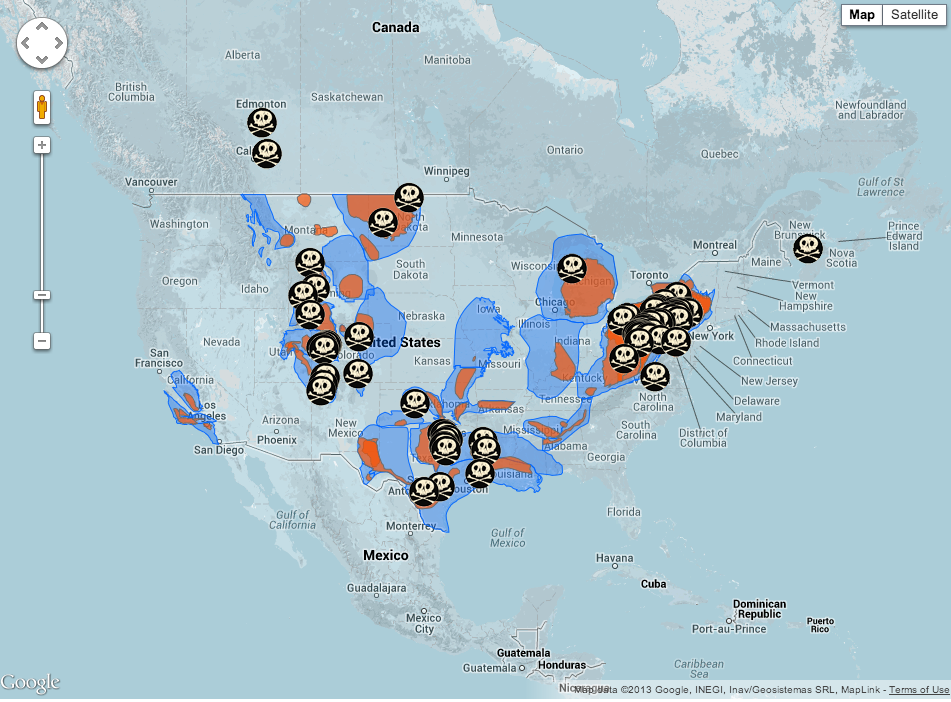 Companies with a financial interest in spreading false information are still paying big money to ensure that such information remains the status quo and they'll continue doing so as long as it's more profitable than allowing the truth to become the norm.

Blatant lies by 'industry experts' who are paid to say what they're told to say? Lies and false information being openly touted as truth? It's still happening today. And with the Internet and social media, it's happening faster than ever.

Whispering to Millions at the Speed of Light

Lies outpace the truth whenever those lies have more backing them than the truth. Today, in a world driven largely by financial interest, there is a lot of money supporting false information.

What do we know about spreading information (false or otherwise) to large groups of people? We know that sensationalism is king, that if something is shocking, or affects us emotionally in some way, we're far more likely to share it with others.

We are incredibly emotional creatures. We release emotion by expressing and sharing it with whoever will listen. If we're not careful, what we share can stray from the truth. This is most likely to happen with things that make us angry or upset.

Take for example the recent news that two US Marine Harrier jets dropped bombs onto the heritage-listed Great Barrier Reef in Australia.

On Twitter, two of the people I'm following, Ross Hill and Anne Wu, tweeted a link to the news article along with their own sub-140-character summary (i.e., a whisper in the global game of broken telephone): 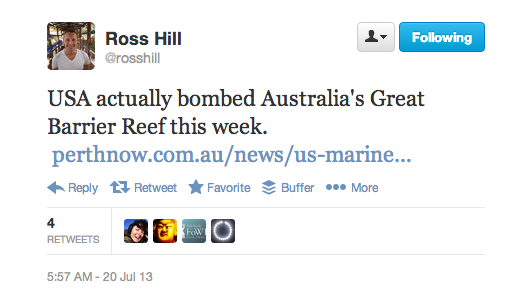 Ross Hill tweeted, "USA actually bombed Australia's Great Barrier Reef this week" and Anne Wu said, "the coral reefs are dying yet the US is still bombing them."

In both cases, it sounds pretty bad, right? It makes you angry that the worlds largest military is doing something as blatantly stupid as dropping bombs on a harmless reef in the ocean. Damn the military!

But hold on. Let's check our facts, shall we?

If you read the article, you'll discover that what actually happened was a training mishap:

US Navy Commander William Marks, of the 7th Fleet Public Affairs, said the jets had planned to drop the bombs on a range on Townshend Island, but that was foiled when the range was not clear.

After several attempts, the jets were running low on fuel and could not land with the bombs they were carrying.

So they dropped the bombs because it would've been too dangerous to land on the aircraft carrier with the bombs still attached. OK, that's understandable. But the bombs exploded in the ocean and destroyed precious coral reef, right?

He said each bomb was jettisoned in a "safe, unarmed state and did not explode".

OK, so nobody "actually bombed" anything and nobody "is still bombing them". There was no explosion and it's unlikely that any reef was harmed at all.

Sure, leaving the bombs in the ocean will certainly be harmful to sea life, as they would corrode and leak harmful chemicals into the ocean over time. But the military is not doing anything about that either, right?

The US Navy is considering how to recover the bombs, which were dropped in a "deep channel" about 16 nautical miles south of Bell Cay, off the Capricorn Coast between Mackay and Rockhampton.

"The safety of personnel and the environment are our top priorities," Commander Marks said.

I'm not picking on Ross or Anne here at all. I just happened to see their tweets and I just happened to click through to the article to read what actually happened. (It seemed too unbelievable to me that the bombing was intentional.)

Their tweets led me to these thoughts on disinformation and helped me link the old game of broken telephone with something that's happening daily in modern adult life. They helped me recognize just how easy it is to spread false or misleading information when the message we're sharing is something sensational.

What led me to take this whole thing more seriously and write this essay was what happened next.

A few days after I saw Ross and Anne's tweets, I happened to see that the WikiLeaks Twitter account had also tweeted about this 'bombing' incident: 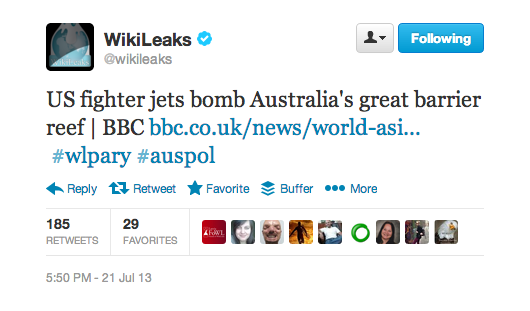 The BBC article, linked in WikiLeaks tweet, is different than the one that Ross and Anne shared, so I thought that maybe some new information had surfaced that proved the military was intentionally bombing the reef (WikiLeaks is, after all, known for leaking information).

Let's read and find out. The BBC article is short; it's only three paragraphs. Here's the second paragraph:

The two planes jettisoned four bombs in more than 50m (165 ft) of water, away from coral, to minimise damage to the World Heritage Site, the US navy said.

It's almost laughable how accurately the opposite message is being conveyed by a simple tweet. Except it's not laughable, because the WikiLeaks Twitter account has 1.9 million followers and 185 people retweeted that misleading message.

The article linked in the tweet by WikiLeaks had three paragraphs, a grand total of 74 words. How many of those 185 people who retweeted and shared the WikiLeaks message actually clicked on the link and verified the facts for themselves?

I'm sure neither Ross or Anne meant any harm by their tweets and I doubt that any of the 185 people who retweeted WikiLeaks meant any harm either. I also doubt any real harm was caused (the military can probably handle a little criticism).

However, Ross has 5,679 Twitter followers and Anne has 717; that's potentially 6,396 ears they whispered their misleading messages into. That's not even mentioning the 1.9 million WikiLeaks followers or the exponential effect of the people who retweeted WikiLeaks.

Whether any harm was done in this particular case is beyond the point. The point is that we're all participating in a global game of broken telephone and that we're all, myself included, responsible for what we share.

We need to be more careful.

What if the Internet was around when cigarettes were being marketed as 'good for you'? How many funny or sensational tweets containing cigarette-promoting ideas would've been retweeted, unknowingly contributing to the future death of millions? 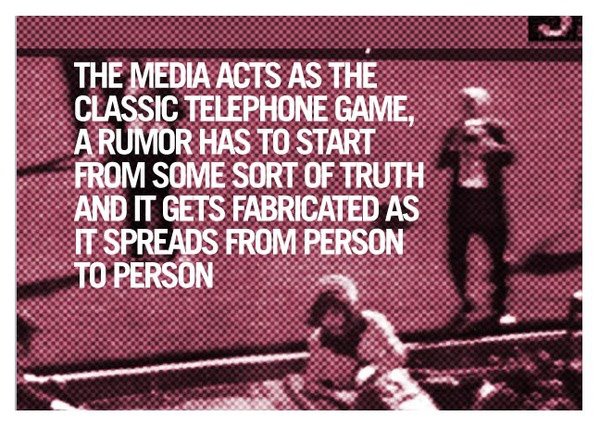 We are the media now and that makes each one of us a media transmitters. Messages spread with our help. If someone in a game of broken telephone refused to pass along a message until they were certain they had it right, the truth would have a greater chance at survival.

Only we can stop the perpetuation of fabricated information. Unless we all start accepting this responsibility we risk assisting those who are pushing misinformation for their own agenda.

If you're going to share something, please, check the facts.

Recognize the power you hold in your hands as you communicate and share online. Recognize that when you share things today you can reach billions of people, not just those in your immediate vicinity or those who you know, but people all over the planet.

When in doubt, do what I do and leave it out. It's far better to share silence than to risk sharing false messages that could harm people.

If you don't know the facts, share questions instead of sensational assumptions. My dad always used to say, "when you assume, you make an 'Ass' out of 'U' and 'Me'."

Assume nothing. Reject sensational attention-seeking. The truth will always be more durable and long-lasting than hollow sensationalism.