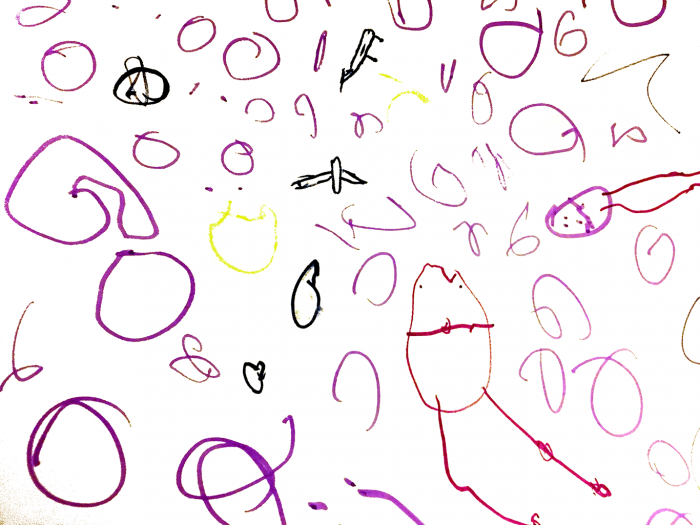 What are kids really good at? Kids are really good at failing. Of course they're not trying to fail. That's not their intention. Their intention is to succeed. But they can't succeed. They can't succeed until they fail enough. And their brains know this, their brains feel it. So they fail anyway. They do their best even when their best won't be good enough, when it won't get them to where they're trying to go.

Ananda drew me a picture the other day. It's a picture of 75 small circles (I counted them). There isn't a single perfect circle. In fact, many of the circles don't even have ends that meet. They're failures. Each one an attempt to draw in one smooth motion a complete circle, and each one a failure. But she drew them anyway, without hesitation. I watched her. Circle after circle after circle. Failing, but repeating each attempt without hesitation, without frustration.

There is so much beauty in this lesson, so much wisdom. It feels hard to grasp the universality of it. Children fail regularly, so they learn and grow and get better, regularly. But as they grow older, they grow more afraid, more unsure, more critical of themselves. The hesitation sets in. They learn slower, and slower, and slower. Instead of growth being self-directed and self-motivated—instead of it being fun—it becomes occasionally motivated by the dread of an external event that might cause more discomfort than the potential failure.

For Ananda it wasn't 'failure'. For her, it was play. It was having fun. It wasn't painful, it was enjoyable. She didn't draw 75 failed circles, she drew 75 shapes that looked like circles so that she could give them to her daddy. Her goal wasn't perfection. Her goal was to try, to make an attempt, and to have fun doing it and then to be happy with the result. Her goal was simply to do something, to take the idea and add action to it, to start and then to finish. To start, and then finish.